As many of you know, I love robots! Some of you have probably seen this video, but I had to post it here because it is one of the cutest things I have ever seen. Enjoy!

Usually I don't rant but today I just have a lot to get off my chest. I'm half way in tears right now. I hate money. I really is the root of all evil. I guess you learn to hate it even more when you don't have it. Right now I am out of work and the only income I have coming in is from my Etsy shop until I find a new day job. My boyfriend is working on and off as his industry is very slow right now. Currently I am responsible for bringing in at least 70% of the income of the household, so money is extremely tight. I felt bad because we spent $20 to go see Avatar this week. It sucks when $20 is a huge expense! Bills are piling up and I'm just barely paying my rent. On top of that I have 3 orders sitting in my Etsy account currently that people never paid for. My phone is about to be shut off on Friday. On top of everything I need a breast reduction. I lost my health insurance when I lost my job. While pregnant with my son last year I went up 4 cup sizes and 5 since having him. I'm currently a 38N (38jj UK). It hurts to walk or stand for long periods of time. Even hunching over my work desk to make my figurines is killing me. I have cuts in my shoulders from my bra straps and my clothes don't fit. Large bras are expensive. I can't afford a new one currently, so I have to wear two of my old ones at the same time. I've looked into getting rated so I can get the procedure done, but even with that I can't afford the monthly payments. I just feel like I'm loosing my mind right now. I have no clue what to do. I'm not even really sure why I wrote this. I guess I just needed to get it out of my head.
Posted by Sleepy Robot 13 at 9:07 AM 1 comment: 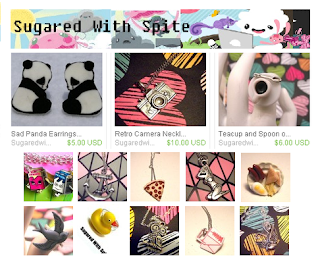 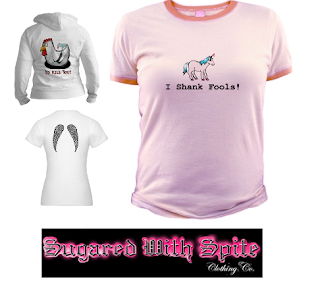 Lately I've been so busy with Sleepy Robot 13. I have almost forgotten about my others shops. Before I started "Sleepy Robot 13" in October of 2009 my main focus was "Sugared with spite clothing", as small clothing line I started with my best friend Vanessa from High school. I would make the designs and she would handle the business aspect. Eventually I wanted to do more than just make designs for T-shirts. So in August of 2009 I decided to use the Etsy account I had just sitting around since 2008 and actually list something in it. I started "Sugared With Spite Jewelry". It began with just a few earrings and expanded into necklaces, rings and even a few one of a kind plush dolls. I'm trying to figure out how to spread my time equally through all of these shops.
Posted by Sleepy Robot 13 at 7:00 AM No comments:

It pays to read the blog! lol

Since all of you have been so awesome over the last few months I decided to do a blog reader only sale. Until midnight February 28th just type the code "thankyou10" into the comments of your orders from the Sleepy Robot 13 Shop and receive 25% off your order! Just check out as normal and when payment is received I will refund 25% of the subtotal of your order. Remember this is for blog readers only!
Posted by Sleepy Robot 13 at 10:41 AM No comments: 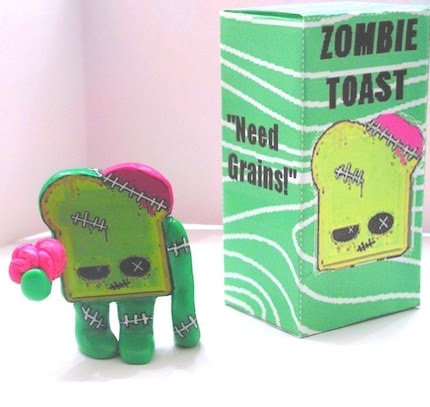 Sorry guys no Zombie Toast vinyl any time soon ): All the companies I've contact about turning my guy into a vinyl figure are way more expensive than I can afford right now or anytime in the foreseen near future. I've received a lot of emails over the last few months from people inquiring about or requesting a vinyl, but for right now it's a no go. I'm still working on the mold making process to produce a few resin Zombie Toast figures but it's a very slow trial and error process. I haven't stopped looking into companies, but have not been successful yet in finding one that will do the small run I am looking for (Most companies I have talked to will only do runs as small as 3000-5000 pieces because of the size.) I will keep you guys posted as more develops!
Posted by Sleepy Robot 13 at 1:34 PM 1 comment: 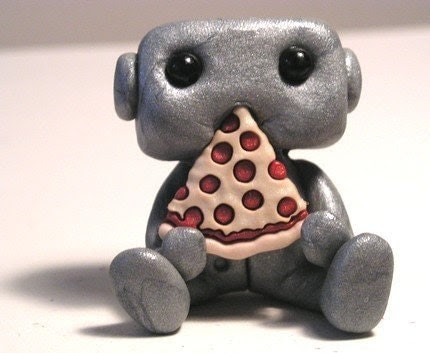 Today my little Pizza Robot was featured on the Tilt Treasures blog. I love the the title of the feature "Pizza...ok,so I was hungry..." Along with my robot she featured other amazing pizza themed items by other great Etsy sellers. I would also advise checking out the blog owners Etsy Shop "TiLT creations". There you will find several unique and lovely bags, purses, clutches, back packs and pouches!
Posted by Sleepy Robot 13 at 7:57 PM 1 comment:

So lately people have been asking me to make music and movie themed figurines. I figured this was simple enough, but with my mind I had to make them as goofy as humanely possible. Heres what I've done so far. Let me know what you think... 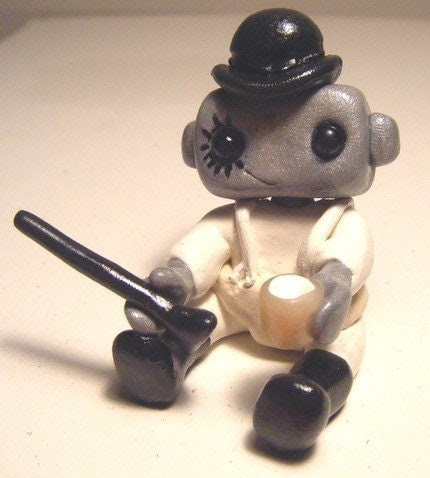 Inspired by the character Alex of the classic "A Clockwork Orange".
Complete with a glass of "the old knifey moloko" (i.e., drugged milk)and a cane. 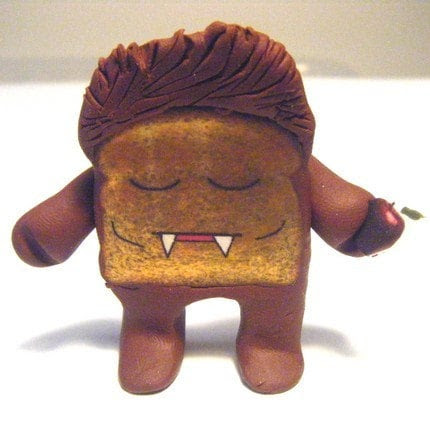 With this one I decided to get really silly. I had been getting a lot of requests for Twilight stuff and I wanted to make something that none of the other Etsy sellers had... and for some reason that was toast...that had Edward Cullen's hair. 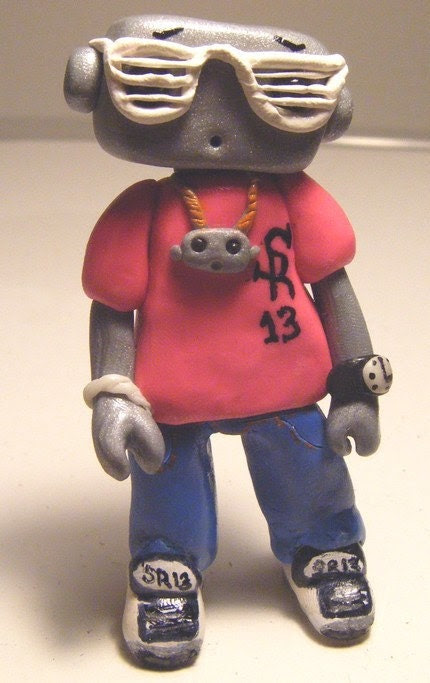 I really, really, REALLY don't like Kanye West, but I think his graduation bear logo is cool. This little guy was inspired by that.

Next I think I may do something involving Lady Gaga, but I'm not sure yet.
Posted by Sleepy Robot 13 at 1:50 PM 4 comments: 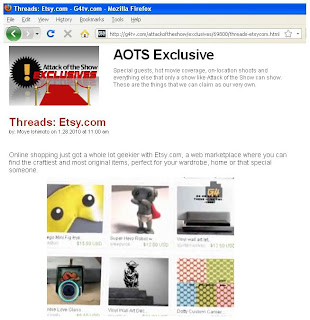 So it was brought to my attention today by sakiwaki that you could see my Super hero robot for a brief second during an episode of "Attack Of The Show" which airs on cable channel G4Tv. Unfortunately I haven't had cable in 3 years, so I missed it ):

G4TV did an entire segment on Etsy (well mostly about the etsy shop "thechopshopstore")None the less it's awesome that one of my items made it's way onto tv even if it was only for a split second. G4 has since posted the segment on their website. You can view the video below: 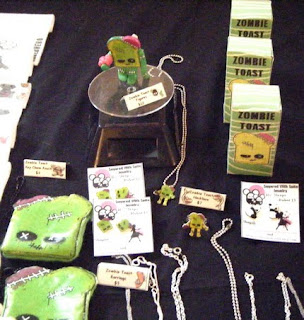 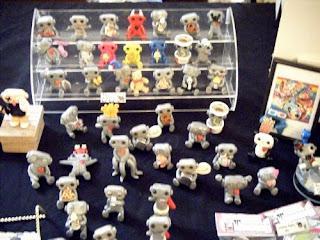 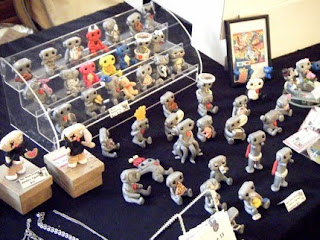 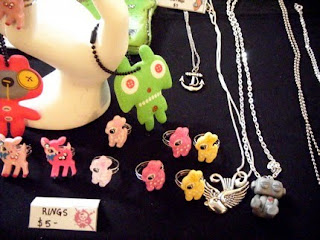 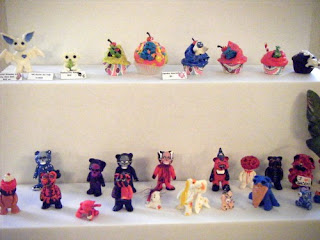 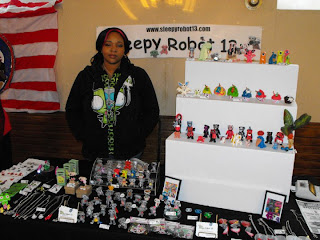 I thought I'd share some photos of my booth at the Upstage Artisan Alley show this past weekend. For it's first year it was a great show for a great cause. If anyone has the chance they should definitely check it out next year. This is actually a smaller set up for me. I decided not to take as much jewelry with me and I usually have a second smaller table of one of a kind figurines. I also had a backdrop to put up but there wasn't enough room for it. I was a little bummed because I ordered a new vinyl banner for my booth but it didn't arrive in time. i ended up making one by hand out of poster board.
Posted by Sleepy Robot 13 at 4:58 PM 1 comment:

Valentine's Day 2/14/2009 10:00am to Midnight ONLY, everything from my Sleepy Robot 13 shop is 20% off!!! During check out just type "Robots need love 2" into the comment section and 20% off your subtotal will be refunded back to your Pay Pal account after payment has been received. *Subtotal excludes shipping cost.

Remember as always all orders $40 and over to the continental United States receive Free shipping. *Order total must be at least $40 After 20% discount is applied and before shipping cost to receive free shipping.

If figurines aren't what your after and Jewelry is more your fare, check out my Sugared With Spite shop. All items in the Sugared with Spite shop are buy 3 get the 4th free. Everything in this shop is $12 and under!

Sorry you cannot combine items from the 2 shops.
Posted by Sleepy Robot 13 at 6:55 AM No comments:

What would you like to see in the Sleepy Robot 13 shop?

What new products would you like to see from Sleepy Robot 13? More rings & necklaces or how about key chains & cellphone charms? Make-up purses, t-shirts, stickers? If there is anything I don't sell now or anything you'd like to see more of let me know!
Posted by Sleepy Robot 13 at 7:34 AM No comments:

I recently had the opportunity to fill out a a few interview questions regarding my Etsy shop and my handmade lifestyle for http://www.indiesmiles.com Columnist Devin aka Oooohshiny wrote a great introduction and article. You can read the interview titled "Robots, Zombies and Squids Oh My!" in it's entirety Here
Posted by Sleepy Robot 13 at 3:15 PM 1 comment:


I will be selling some items from my shops at discounted prices as well as items that are not available online. Also I will be selling many unique Valentine's day gifts. So if your in the are or feel like taking a road trip come on down! (Wow... that felt really Price is Right-ish lol!)
Posted by Sleepy Robot 13 at 11:55 AM No comments:

Yesterday my son Giovanni took his 1st steps! This is a big deal to me and I am so proud of him!
Posted by Sleepy Robot 13 at 11:53 AM No comments: 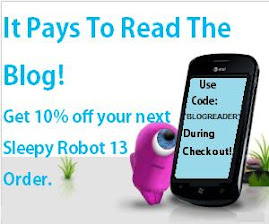 Use Code: BLOGREADER during checkout for 10% off your order